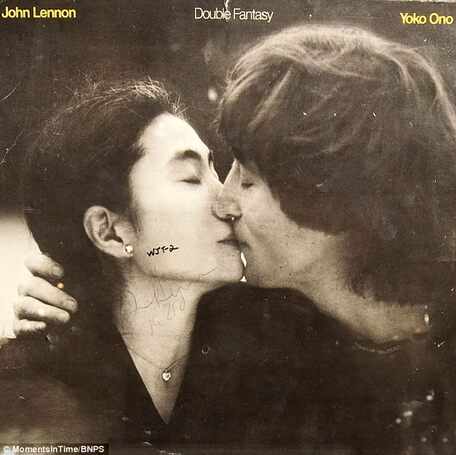 The Double Fantasy LP
​(The "WJT-2"is some code from its use as evidence)
​On December 8, 1980 Lennon autographed this Double Fantasy album for Mark Chapman as he and Yoko Ono left the  Dakota apartment building in New York for a recording session at 5pm .
The crazed fan stashed the album in a large plant pot at the entrance to the apartments and waited until Lennon and Ono returned at 10.50pm.
As the former Beatles walked into the building Chapman shot him four times in the back. He was pronounced dead 10 minutes later on arrival at hospital.
The signed album was found in the plant pot by a passerby that night who handed it in to the police to be used as evidence in Chapman's trial.
Officials returned the album to the unnamed member of the public a year later with a letter of gratitude from the District Attorney.
Remarkably, the cover and dust jacket still contains forensically enhanced fingerprints of Chapman. A Beatles fan all of his life, the man hid the album under
his bed for 18 years before he sold the album to a private collector in 1999.

John Lennon sings an autograph for his killer Mark Chapman (Photograph Paul Goresh)
Paul Goresh, the photographer who took the historic photo, explained that earlier on 8 December he had spoken to Mark Chapman, who told him he had flown in from Hawaii. When Lennon came out of the apartment block, Chapman held out a copy of Lennon's new album, Double Fantasy, for a signature. Lennon asking, "Is that all you want?" and Goresh took the photograph.
When Goresh heard later that Lennon had been shot by a fan from Hawaii, he was filled with repulsion. "I immediately realised who it was"
Following the murder, Chapman's legal team intended to mount an insanity defense that would be based on the testimony of mental health experts who said that he was in a delusional psychotic state. He was more cooperative with the prosecutor, who argued that his symptoms fell short of a schizophrenia diagnosis. As the trial approached, he instructed his lawyers that he wanted to plead guilty based on what he had decided was the will of God. The judge allowed the plea change and concluded that Chapman was competent to stand trial, sentencing him to a prison term of 20 years to life with a stipulation that mental health treatment would be provided.

Chapman refused requests for press interviews during his first six years in prison; he later said that he regretted the murder and did not want to give the impression that he killed Lennon for fame and notoriety. He ultimately supplied audiotaped interviews to journalist Jack Jones, who used them to write the investigative book Let Me Take You Down: Inside the Mind of Mark David Chapman in 1992. In 2000, Chapman became eligible for parole, which has since been denied ten times.
____________
Now, the present LP owner, has decided to put the 'morbid' piece of music history on the market for £1.2million ($1.5million) Gary Zimet, president of US dealer Moments In Time which is selling the album on general sale.
Estimated $1.8 million​​